During fall of 2018 and spring of 2019, I did my Psychology Honors Thesis under Dr. Steven Hackley at the University of Missouri. Here is an excerpt from the poster I presented about the project at the Midwestern Psychological Association Conference in April 2019. Special thanks to Dr. Hackley, Dr. Underwood, and others in the Clinical and Cognitive Neuroscience Laboratory who made this a fantastic experience.

The conventional understanding of working memory (WM) holds that memory contents are tied closely with conscious awareness. However, recent work in unconscious visual perception suggests that unconsciously perceived items may also be stored in WM (Pan et. al., 2014). The purpose of this study was to extend these findings by establishing whether unconscious items held in WM also demand WM capacity. It was hypothesized that participants would be less accurate at a change detection task when more unconscious memory items were present.

The study consisted of a 3X1 repeated measures design including three conditions: presentation of 3 visible and 0 invisible items (20 % of trials), 3 visible and 1 invisible item (40 % of trials), and 3 visible and 2 invisible items (40 % of trials). Twenty-eight undergraduate students participated. Participants looked through a mirrored stereoscope, which isolates visual input between each eye. A continuous flash suppression (CFS) paradigm was used to render items overlapping with a high contrast Mondrian-like pattern unconscious. During CFS, the visible memory array (3 items) was presented shortly before an invisible memory array (0, 1 , or 2 items). After a retention interval, participants were asked to specify whether a test probe was of changed orientation and how confident they were of their answer. Finally, participants indicated whether or not they consciously observed any to-be-suppressed items using the Perceptual Awareness Scale. Out of 360 trials over 18 blocks, 180 (half) were Orientation Change trials. If the probe changed orientation, it was always a 90˚ change. 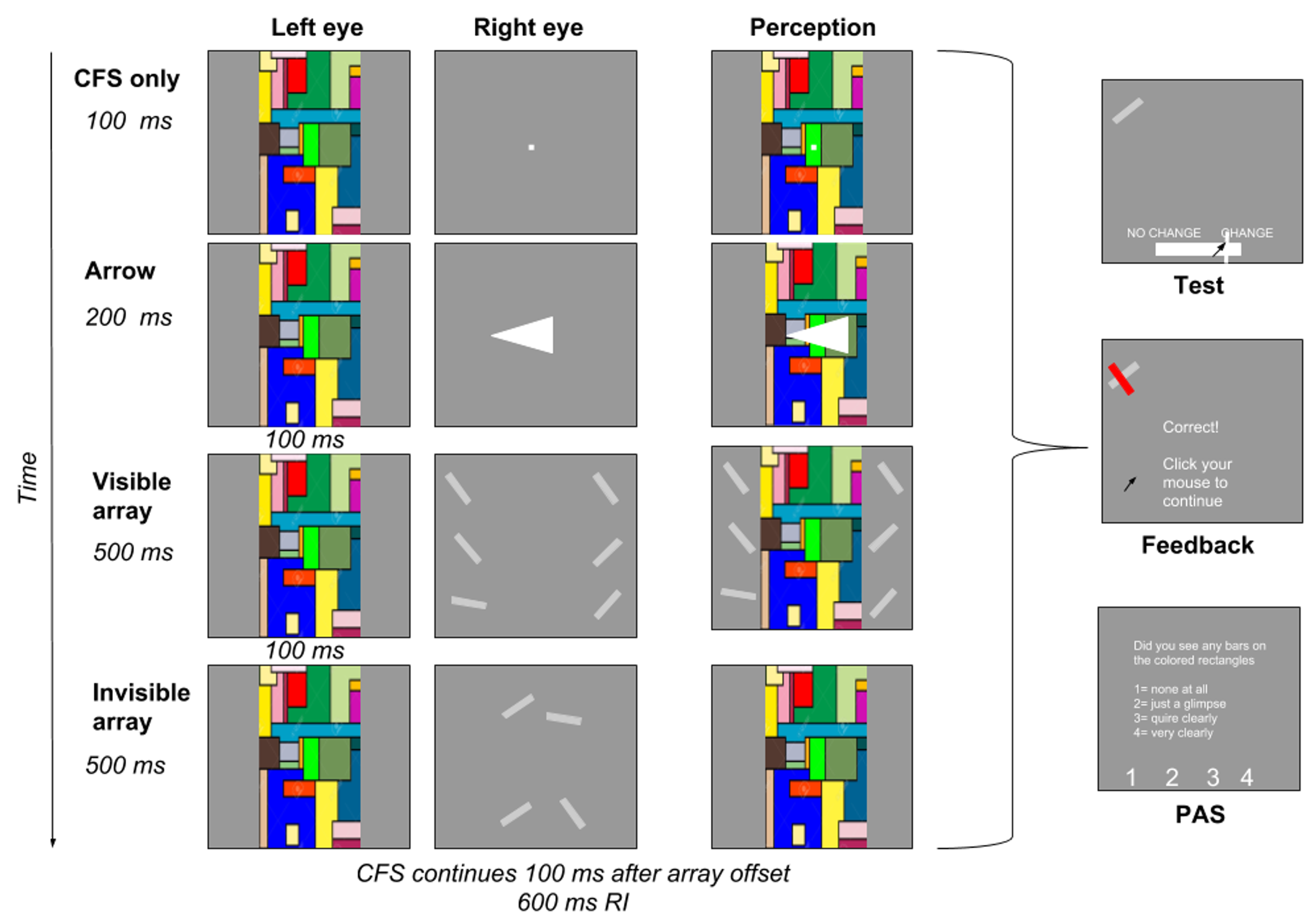 Schematic of an “Orientation Change” trial with test item probed on the visible hemifield (no Mondrian). The subject should drag their cursor somewhere along the white bar to indicate (1) that the test item is of a changed orientation and (2) the level of confidence they have in their answer, from 0-100%.

Subjects were excluded from analyses if they (1) reported conscious sight of suppressed items for half or more of the experiment in a post-experimental questionnaire or (2) scored less than 65% accuracy on trials with 3 visible and no invisible items.

Fourteen participants remained after applying exclusion criteria based on task accuracy and perception of suppressed items. Analysis of the full 18 blocks revealed a null effect; however, analysis of blocks 2-8 demonstrated a main effect of the number of invisible items on task accuracy F(2, 28) = 4.26, p = 0.02. The difference between the 3/0 condition and the 3/1 condition [t₍14₎ = -2.57, p <.01, one-tailed], as well as the difference between the 3/0 and 3/2 condition [t₍14₎ = -2.07, p <.03, one-tailed], demonstrated a statistically significant effect 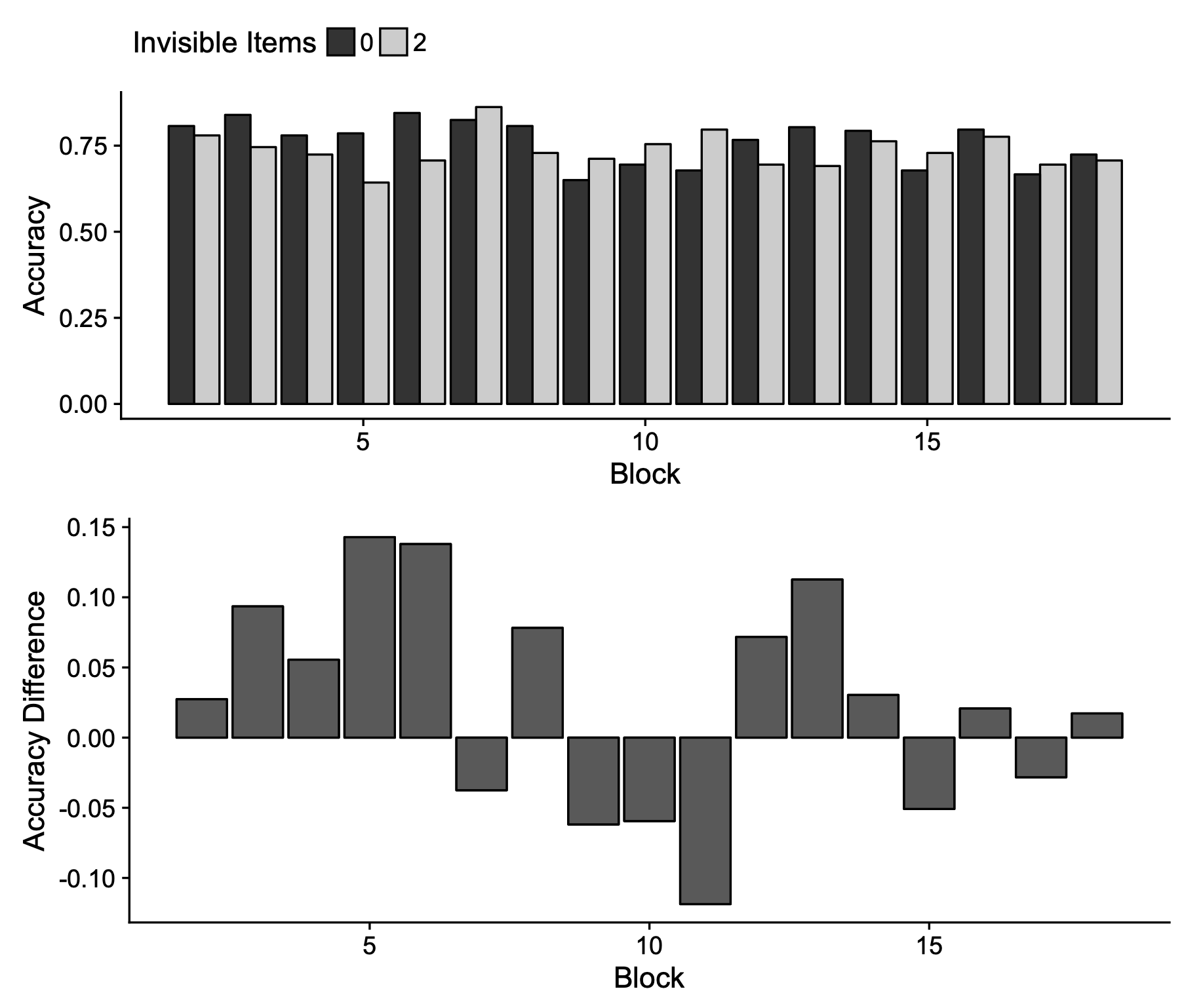 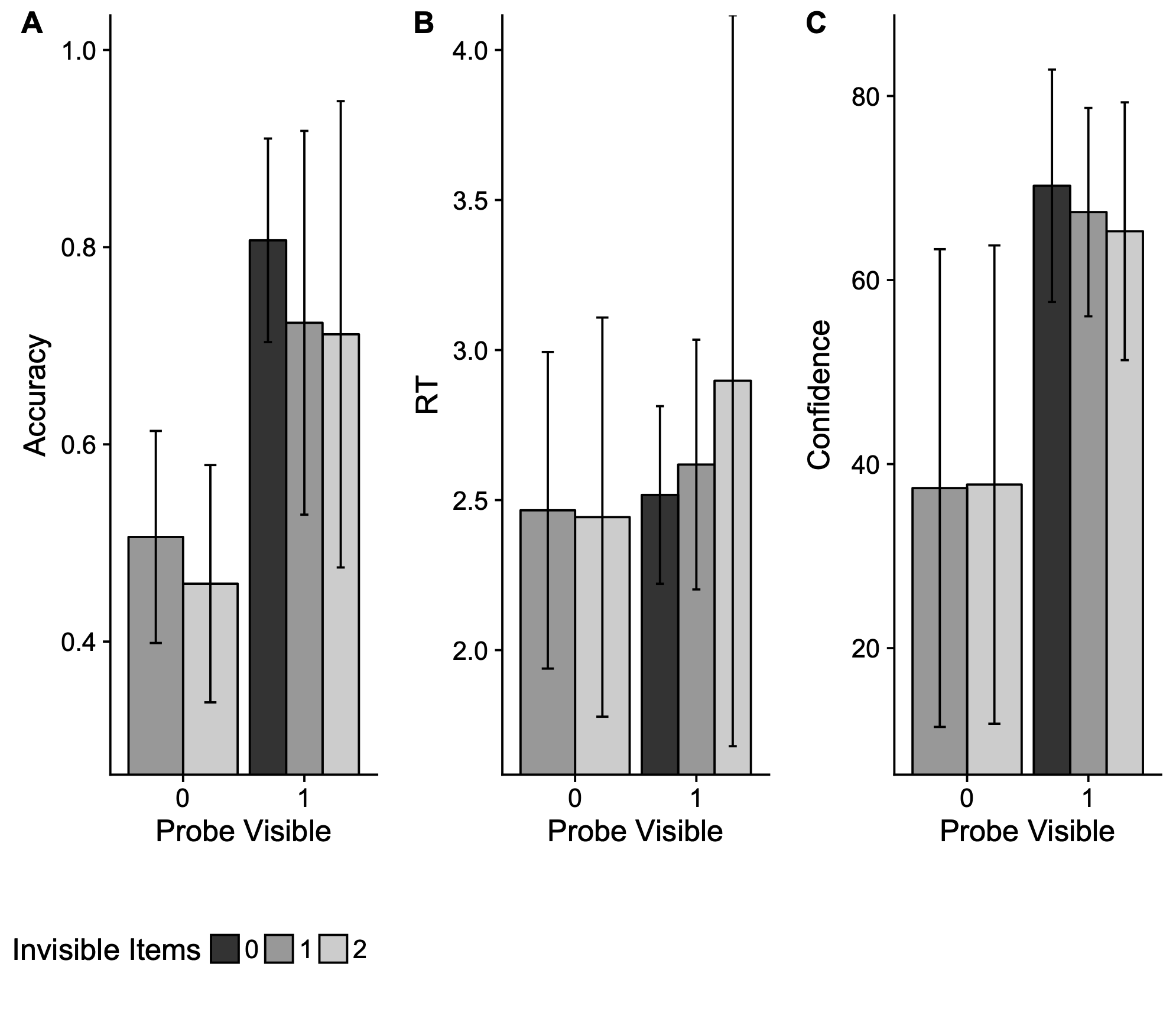