Thanksgiving dinner this year was all too quiet. Not because the food was good, but because we sat on our phones — brow furrowed — trying to defuse Aunt Mildred’s latest wine-induced Facebook comment rampage.

If you’re like me, you might have thought two weeks ago: “How did this happen? Hackers… Definitely hackers. The Russians? Probably Putin”. Then, it wasn’t a joke and the results became real. Let’s explore some of the differences we saw this year, along with the psychological consequences:

We now live on networks encouraging instantaneous political debauchery: it messed with us in unintended ways. Here is a collection of cognitive biases/distortions exploited during the 2016 election cycle, many of which were exacerbated by the effects of social network design. Enjoy the Trump quotes interspersed for dramatic effect and your reading pleasure.

Group Biases: There’s only one shade of red

“I will bring people together.”

To begin our journey, lets delve into one of the most notable aspects of our social feeds: the blue and red echo chambers we are surrounded in. Social media intends do bring groups of like-minded people together, meaning we quickly become inundated with posts reflecting our own views. What happens when Jim from 8th grade posts something straying from these values? Bye bye Jim! Soon our content streams look like this Wall Street Journal comparison of conservative and liberal media feeds, with each news event receiving two separate “spins”. 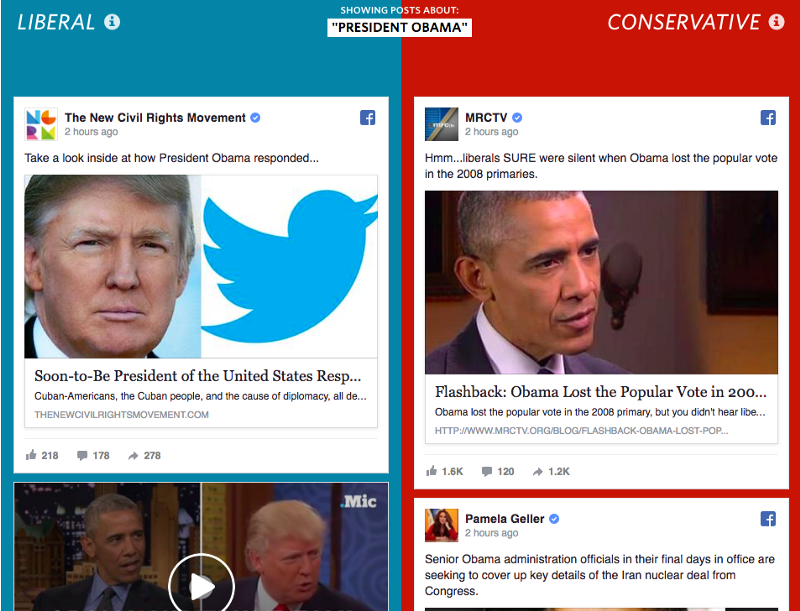 Just as our feed of events is skewed, so becomes our perception of reality. Them or those people quickly become very alike: they all suck, are mostly wrong, and make no sense to us. They are that amorphous blob. “The Conservatives” or “The Liberals”.

Pretty soon, we get the goofy and off-putting feeling that were at a sports game — one with consequences after game day. An effective way of reducing bias between groups is simple interaction. Alas, arranged friendships and political playdates wouldn’t fare well for Facebook ratings.

The Appeal to Emotion fallacy: I feel therefore it is 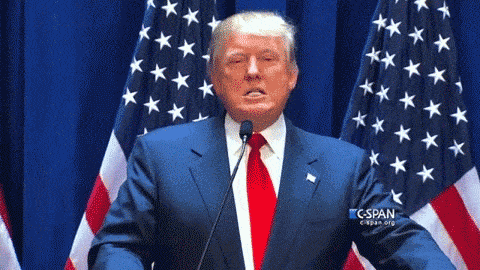 “America is a mess. The attacks on our police and the terrorism in our cities threaten our very way of life. Many have witnessed this violence personally.”

This one is especially simple and important. A silent saboteur of our perception, appeals to emotion lead us to neglect factual information in favor of an automatic emotional response.

How do new media sources affect our emotional processes and increase vulnerability to emotional appeals? Consider a few differences between old media (the newspaper) and new media (social feeds). The first is multimedia. Videos, pictures, gifs, and audio clips provide a much more compelling medium of connection than static text on a page. What’s more, research dating back as far as 2000 has found multimedia to skew our memory and increase psychological arousal, reducing our ability to logically assess content. This also brings us to a few multimedia-related memory biases:

Back to emotion… All emotions do not spread across the web equally. For instance, consider this paper out of Beihang University in which the authors found that anger is the most viral state. Intriguingly, emotions like anger seem to increase the same intergroup biases we went over earlier, opening up an inconvenient vulnerability for exasperated intergroup issues.

No. Trump’s name is like lead — harmless in low doses yet toxic as it accumulates. This is due to the mere-exposure effect, or the phenomenon in which simply being exposed to something repeatedly makes us like it more. This effect influences romantic choices (high-school sweethearts) and even sways stock investing (apple).

Politics is no exception.

Washington Post The problem is, as you would imagine, both new and old media have slathered Trump’s name on readily. The Washington Post published this info-graphic of usage patterns over the span of a week this March. To view a similar comparison involving Facebook engagements, check out Adweek’s snazzy info-graphic. It looks similar, I promise. When combined with a few other memory-related cognitive distortions, Trump’s name, statements, and national escapades get etched in our memory:

Let’s talk more about memory: false memory to be exact…

“But one thing I can promise you is this: I will always tell you the truth.”

In the world of fake news, 2016 was one for the books. Pope Francis (allegedly) endorsed Trump as president. The FBI agent suspected for Hillary email leaks was found dead in his apartment (just kidding). When false news gets more total online engagement than real news, it’s difficult to catch the lies in the feed. This fibbery is more than benevolent clickbait.

Misinformation has long and enduring consequences and is not always mentally overwritten when reports are corrected. As Rich and Zaragoza of Kent State found above, 21% of people flat forget news corrections! Psychologically speaking, this is the continued influence effect. What’s more, researchers draw a distinction between explicit and implied misinformation, the latter is much more difficult to correct. This means that even if the event is accepted as false, implied damages to credibility, reputation, and character are much trickier to override.

Take for example the story of Eric Tucker, who posted photos of a long string of busses claiming they contained hoards of paid protesters being shipped to anti-Trump demonstrations. Despite rescinding the claim soon after, the post received around 16,000 shares on Twitter and over 350,000 shares on Facebook. “Make America Great Again”

There it is. The nostalgia evoking, Chevy pickup driving , kiss-a-baby patriotism that gets me ready to kick a Commie. Yet, America is more similar to its past than our memories make it out to be. There are cognitive factors distorting our perception of the past — factors Trump was able to exploit to form a particularly poignant campaign slogan.

Declinism: The Good Ol’ Days are not as good as they seem

The pervasive belief that ones country, institution, or society is entrenched in a downward spiral is what some historians have dubbed declinism. Despite a string of declinist candidates stretching back as far as the Carter and Nixon administrations in the 70’s, this belief is biased and unreliable. As the Guardian summarized in this 2015 article, our assessment of the past is distorted by the “reminiscence” bump and rosy retrospection. 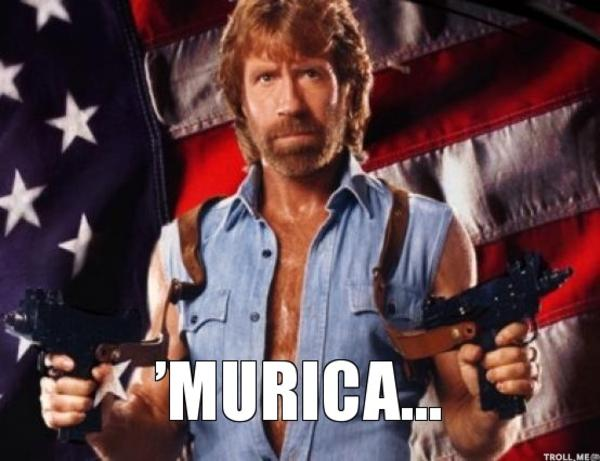 Try it. Ask your grandparents to recall lifetime events and they will likely recount many from the age of 10–30 when the world was novel and many new experiences were particularly powerful. Yet, Grandpa Alfred’s reminiscence bump wouldn’t be an issue if he didn’t remember it more favorably than it actually was. After being documented in 1997, researchers found rosy retrospection to positively bias our view of the past as we favorably recall previous experiences — even if our evaluation was neutral at the time. Declinism isn’t as relevant to new media sources, but it’s interesting and potentially wrong nonetheless.

Integrative Complexity: You’re either with us or against us

“Mark my words. I will build a wall”

Integrative complexity (IC) is the measure to which we consider the messy, nuanced nature of the world. Rather than involving the specific content of a message, IC measures the structural pattern of speech, considering integration (fusion of various dimensions), and differentiation (awareness of these dimensions). Think of the careful precision of a scientific paper compared with a certain five year old.

Researchers have linked increases in integrative complexity with the resolution of the cuban missile crisis , and found it to be predictive of terror attacks while analyzing speech patterns of Osama Bin Ladin preceding 911.

When complex social issues requiring hours of Supreme Court debate and pages of legislation are condensed to a pithy hashtag it’s not surprising that details become lost. Pour over troves of immigration research, conduct international outreach, speak with experts to examine the tradeoffs of a well-reasoned domestic immigration policy? Nope. Build a wall. While we’re here, here are a few additional cognitive errors relevant to information processing and the assumptions we make about it:

Well, there you have it! Those are a few of the many cognitive distortions and biases out there. To get a better idea of the few dozen common ones check out the Wikipedia entry going over cognitive distortions, and another specific to cognitive biases. If you find other election and social media relevant biases you think should be added, post a comment and I will take a look.

Caveats: I am not an expert in political science and I am not advocating for one side of the isle (in this post)… I do not hate social media. I just think it’s interesting and should be explored. Also, thanksgiving was peaceful and phone-less.